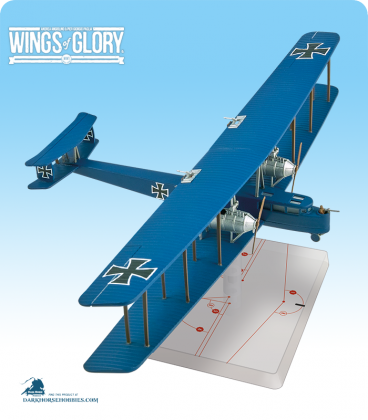 Pilot the gargantuan R.VI, an impressive and accurate replica of the bomber that flew raids over England at the command of Hauptmann Schoeller.

The first Zeppelin mass–produced version to fly over the battle field was the impressive Zeppelin–Staaken R.VI, with a wingspan rivaling that of a WW2 Superfortress. Flying at night with a deadly bomb load up to 4400 pounds, R.VIs were used in bombing raids, bringing destruction and terror to London until the late spring of 1918.

The Zeppelin Staaken R.VI was the largest bomber in service on the Western front during World War I, with its 42.2 meter (138.5ft) wingspan and a maximum bomb load of 4,400 lbs. It was powered by two pairs of engines, and had a maximum range of 500 miles. In flight, it normally had a crew of seven - commander, pilot, copilot, radio operator, fuel attendant and two mechanics. When on the ground it was attended by a 50-man crew, including a great range of specialists.

This Zeppelin Staaken R.VI featured in WW1 Wings of Glory is the R.28/16, commanded by Hauptmann Arthur Schoeller. It was produced by Schutte-Lanz, with four 245 h.p. Maybach Mb.1Ya engines and was accepted 12 February 1918 at Rfa.501. It became the Schoeller aircraft after the loss of the R.VI 27/16, in March 1918. When returning from England, the 27/16 fuel lines froze, and the R.VI's remarkable capability was shown by its long glide to a crash landing in Belgium. All the crew survived.

Of the 13 R.VIs who saw action during the war, four were shot down in combat, while the majority of the losses were from crashes during landing, most due to reduced visibility, at night, or in foggy weather. Six of the 18 units built survived the war or were completed after the armistice.