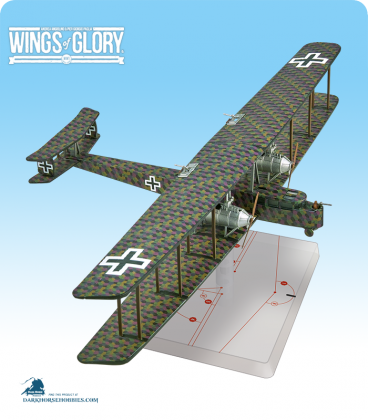 Take control of this powerful aircraft, the largest wood–and–canvas flying machine ever built, and once again fly the dramatic mission commanded by Hauptmann Schilling.

The first Zeppelin mass–produced version to fly over the battle field was the impressive Zeppelin–Staaken R.VI, with a wingspan rivaling that of a WW2 Superfortress. Flying at night with a deadly bomb load up to 4400 pounds, R.VIs were used in bombing raids, bringing destruction and terror to London until the late spring of 1918.

The Zeppelin Staaken R.VI was the largest bomber in service on the Western front during World War I, with its 42.2 meter (138.5ft) wingspan and a maximum bomb load of 4,400 lbs. It was powered by two pairs of engines, and had a maximum range of 500 miles. In flight, it normally had a crew of seven - commander, pilot, copilot, radio operator, fuel attendant and two mechanics. When on the ground it was attended by a 50-man crew, including a great range of specialists.

This Zeppelin Staaken R.VI featured in WW1 Wings of Glory is the R.33/16, an Aviatik built R.VI, with four 260 h.p. Mercedes D.lVa engines, flown by Hauptmann Erich Schilling, commander of Rfa 500. Schilling served in Immelmann’s FFA 62 and commanded the KG 3/18 and Kasta 18, before assuming the Rfa 500, in late 1916. He and four members of his crew died when the Staaken R.VI 52/17 crashed into a house near Villers la Tour early in the morning of 12 August 1918. They were returning from a short-range operation against Beauvais. The R.52 was a new machine, heavier than previous types, and pilots were unaccustomed to the different position of the cockpit. It was a pitch-black night over Villers la Tour when the R.52 side-slipped, caught itself and side-slipped again. The right wing hit the ground and fuel from burst tanks spilled over the hot engines and ignited.

Of the 13 R.VIs who saw action during the war, four were shot down in combat, while the majority of the losses were from crashes during landing, most due to reduced visibility, at night, or in foggy weather. Six of the 18 units built survived the war or were completed after the armistice.