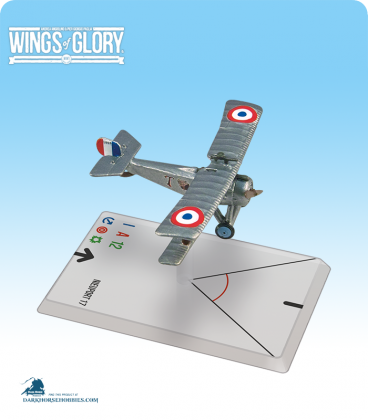 The Nieuport 17 was a nimble fighter, first released in March 1916. Its excellent maneuverability made a big impact. It soon equipped all of the French fighter squadrons, served as a top British fighter for a year, and was even copied by the Germans! The “sesquiplane” design (a “half” lower wing) gave excellent climb and visibility, but was a weakness in stressful maneuvers. A favorite of aces, the Nieuport 17 was produced in France, Italy, and Russia and used by all Allied armies until late 1917.

American volunteers and French officers fought side–by–side in the “Escadrille Lafayette.” Cards for two of them, Raoul Lufbery and Bill Thaw, are featured in this model.