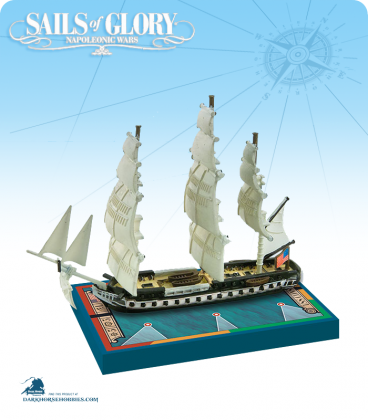 Sail and fight with the USS Constitution, “Old Ironsides”, the most famous of the six heavy frigates representing the birth of the US Navy!

USS Constitution, the most famous among them, is a wooden-hulled, three-masted heavy frigate of the US Navy. Launched in 1797, Constitution was built to provide protection for American merchant from French ships and to defeat the Barbary pirates. Constitution is most famous for her actions during the War of 1812 against Great Britain, when she captured numerous merchant ships and defeated five British warships. Retired from active service in 1881, Constitution served as a receiving ship until designated a museum ship in 1907.

The ship base, ship card and ship log are printed on two sides -the game data of a second version of the “USS Constitution 1797 (1798)” is printed on the back, allowing the players to decide the most historically appropriate version for a scenario. This special pack also includes Crew Cards and Captain Cards for William Bainbridge and Charles Stewart, two of the most famous commanders of the ship, to represent their specific and unique skills.

Designed to be used with the tactical ship-to-ship game system created by Andrea Angiolino and Andrea Mainini, each Sails of Glory® Ship Pack is a ready-to-play model, painted and assembled, 100% compatible with any other Sails of Glory game product.

Read more about this ship and in our preview article focused in her history.