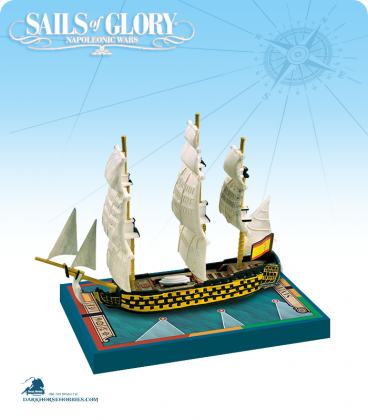 The Santa Ana was a 112–gun three–decker ship of the line of the Spanish Navy, designed by Romero Landa. This ship was launched on 28 September 1784 and, after a positive test, became the first of her class. Subsequent Spanish three–deckers would be built following the same plans. At Trafalgar, Santa Ana was the flagship of Alava, suffering 97 killed and 141 wounded, with Alava himself seriously wounded. Initially captured by the British, a squadron succeeded in recapturing her two days later and returning her back to Cadiz. In 1810 she was captured again in Avana by the French and sank in its Arsenal in 1816.

This ship pack can also be used to represent the Spanish Meregildos class “Mejicano 1786.”