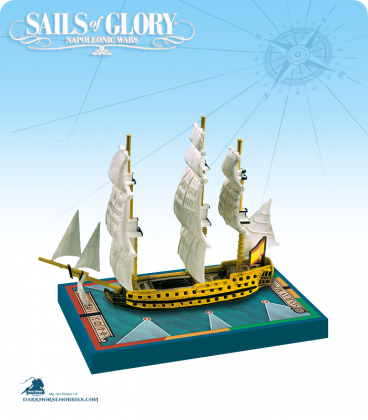 The San Juan Nepomuceno was a Spanish ship of the line built in 1765 in Guarnizo in Cantabria, on design of Francisco Gautier, along with other similar ships. She was used for many years for many different missions, many of them in the Caribbean. In 1793 she fought against Revolutionary France, especially in the occupation of Toulon. In the Battle of Trafalgar, she achieved glory under commander Don Cosme Damian Churruca and provided an incredible example of Spanish heroism, fighting British ships after the loss of over 400 officers and crewmen. Ultimately, she was captured and renamed by the Royal Navy.