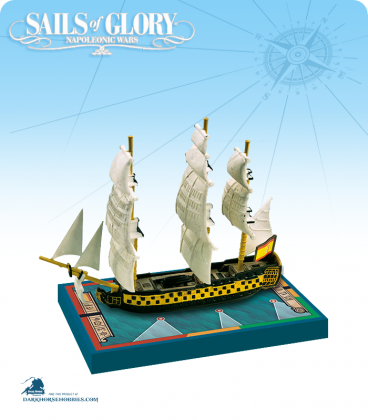 CAV Miniatures: [SO] Lion I AV

The Real Carlos was a 112–gun three–decker ship of the line, built following plans by Romero Landa for Santa Ana. She served in the Spanish Navy during the French Revolutionary Wars, but was destroyed during the Second Battle of Algeciras, with the loss of many of its crew. After participating in the capture of San Pietro Island for Spain and Sant'Antioco for France, in July 1801, she was in Algericas battling against the British fleet. The HMS Superb, cutting through the rearguard, maneuvered between Real Carlos and San Hermenegildo. When the Spanish ships opened fire, they struck each other and then collided, with fire spreading out of control. Both exploded and more than 1700 men were killed in the blast.

This ship pack can also be used to represent the Spanish Meregildos class “Conde de Regla 1786.”