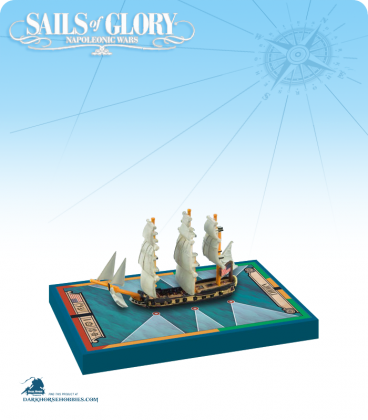 The Swan class was a class of 14-gun ship-sloops (even if in fact they mounted, after 1779, 16 guns). The class was designed for the Royal Navy by the Surveyor of the Navy, John Williams. Twenty-three more were ordered between 1773 and 1779; they represented the 'standard' ship-sloop design of the British Navy during the American Revolutionary War, during which eleven of them were lost. Surviving vessels went on to serve during the French Revolutionary War and Napoleonic War.

Thorn was the former HMS Thorn, a Swan class vessel built at Mistleythorn, and launched February, 17th 1779. HMS Thorn was coppered and pierced for eighteen guns, but mounted only fourteen 6-pounders. She was captured by two American privateers on August, 25th 1779; then, she became an American privateer with a number of successful engagements and prizes to her name, until the British ship Arethusa re-captured her on August, 20th 1782. This ship pack can also be used to represent the American ship-sloop “USS Atlanta 1781”.