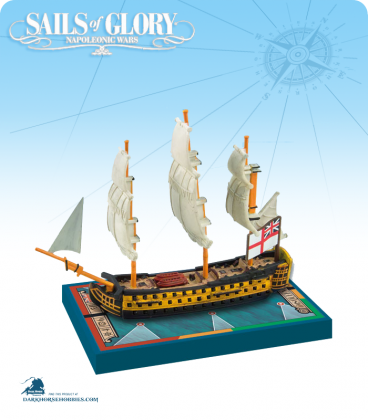 The prestige ships of the British Navy were the three-deckers, carefully and lavishly built by the Royal Dockyards and requiring many years of work. Rarely commissioned in peace-time, and preserved with expensive overhauls and rebuilding, the few First Rates served as flagships, and they were the strongest units of the line of battle, even if they were very difficult to handle. Each 100-gun ship had an established complement of 850 men in addition to extras assigned when used as flagships.

HMS Queen Charlotte, a 1st rate of 100 guns, was in service barely a decade before perishing in an accident off Livorno. Before her destruction, however, she saw service as the flagship of Admiral Earl Howe at the Glorious First of June (1794), the first fleet engagement of the French Revolutionary War. The Queen Charlotte broke through the French line astern of the 120-gun Le Montagne, and subsequently engaged, dismasted and finally secured the surrender of the 80-gun French ship of the line Le Juste. This ship pack can also be used to represent the British first rate ship-of-the-line “HMS Ville de Paris 1795”.