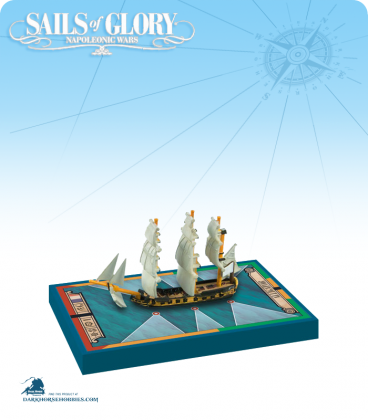 The Swan class was a class of 14-gun ship-sloops (even if in fact they mounted, after 1779, 16 guns). The class was designed for the Royal Navy by the Surveyor of the Navy, John Williams. Twenty-three more were ordered between 1773 and 1779; they represented the 'standard' ship-sloop design of the British Navy during the American Revolutionary War, during which eleven of them were lost. Surviving vessels went on to serve during the French Revolutionary War and Napoleonic War.

The French ship Alligator was originally the HMS Alligator, a British 14-gun sloop launched in 1780. In April 1782 she destroyed a French store ship and captured several forts. On her way back to Britain on June, 26th, she encountered the French 32-gun frigate La Fée, off the Scilly Isles, and was captured. Between 1782-83 she was known as Alligator. In October 1783 she became the packet ship Courrier de New-York. This ship pack can also be used to represent the French ship-sloop “Le Fortune 1780”.