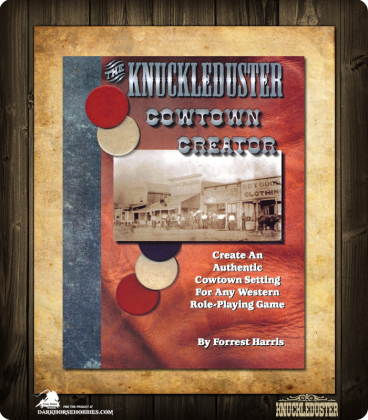 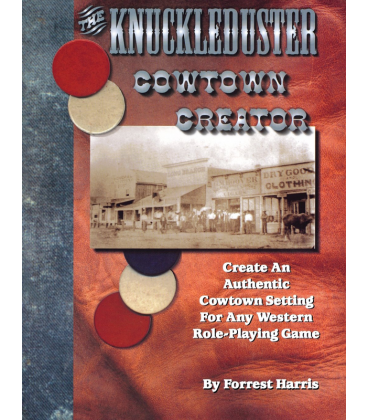 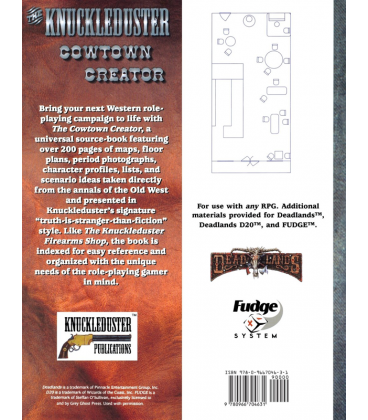 Create an Authentic Cowtown Setting For Any Western Role-Playing Game!

The Cowtown Creator provides you with all the information you need to design a Western town for your next role-playing campaign, short story, or penny dreadful. Each chapter covers a different type of institution or commercial establishment, providing the designer with a wealth of historical detail. Like the Firearms Shop, the Cowtown Creator is a Universal Sourcebook, containing over 200 pages of information for ANY GAME SYSTEM, including the 3rd edition of the world's most popular role-playing game! (Additional information is provided in a special appendix for both versions of Deadlands (TM) and FUDGE).

Featuring information NEVER BEFORE ASSEMBLED IN ONE VOLUME:

This resource book is a great aid for any Game Master, regardless of actual historical knowledge, creating scenarios or running games for Gunfighter’s Ball, manufactured by Knuckleduster Miniatures.

If you enjoy the Western setting in the mid to late 1800's in the USA, you'll enjoy this book. Not only is it a great primer on what one might encounter in an American western cowtown, it has a really simple but flavor filled encounter/scenario generator. Stuck for a period name for your character? No problem! This book offers nearly endless possibilities for literally countless hours for ANY western role playing game! Highly recommended and is a great value for the money in this reviewer's opinion.