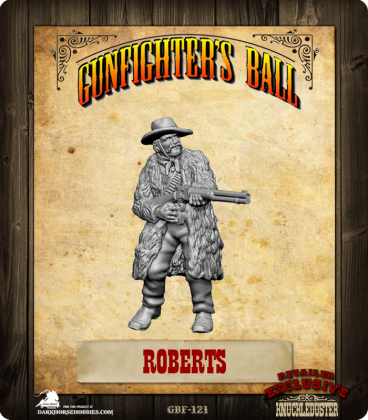 Buckshot Roberts was one of those men who appeared on the frontier giving little history of his own past. He traveled West from Texas, but it is thought that he had been born in the East. He spent a good deal of his life in the United States Army, where he reached the rank of sergeant before his discharge; after which he lingered on the frontier, as did a good many soldier of the day.

He was at one time, a member of the famous Texas Rangers, and had a reputation as an Indian fighter during which time he was badly wounded by the Comanche. At some point, he found himself on the other side of the law, against the Rangers, and once held off 25 of them, though he was nearly killed during this encounter. From these wounds, he had been so badly crippled in his right arm that he could not lift a rifle to his shoulder, which is how he got the nickname “Buckshot” Roberts - because of the nature of his wounds.

Gunfighter's Ball is the most detailed and finely-cast wild west miniatures line ever created. The figures are designed digitally and the "green" is mastered with a jewelry-grade 3D printer. With this printing technology, the small details are rendered sharply and the smooth areas are smooth like porcelain; none of the banding or graininess found in cheaper printing methods. Each figure is then cast in razor-crisp tin pewter (a far cry from the lead minis your Dad painted).

Retailer Exclusive!
This figure is only available from Knuckleduster Retailers.