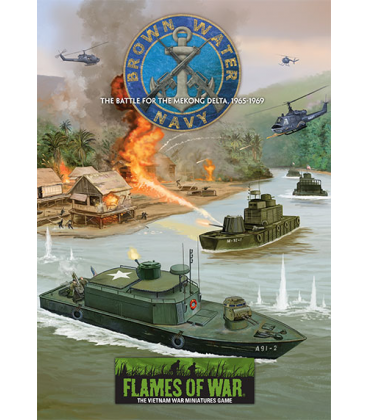 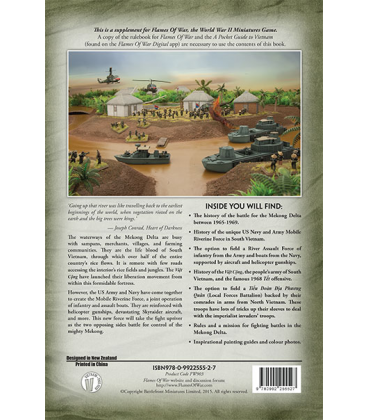 The arrival of Brown Water Navy represents Battlefront’s fourth tour in Vietnam wargaming. It takes Flames Of War into uncharted waters, so to speak, with the arrival of boats and adds a whole new dimension to amphibious combat. New models and challenges await veteran and new players alike in Brown Water Navy.

It’s hot and unbearably humid as the boats wander up the river. Each sailor and soldier is on high alert, fingers tensely pressed against their weapons’ triggers as they scan the riverbanks for anything out of the ordinary. A small movement in the bush is all the warning the Brown Water Navy gets before a salvo of rocket-propelled grenades smashes into the convoy...

For US armed forces in Vietnam, 1965 was a year of rapid expansion. A major communist offensive was narrowly defeated by the rapid deployment of Free World forces to the Republic of Vietnam (South Vietnam). It was quickly recognised that one of the major keys to the enemy’s success was the ability to supply the communist National Liberation Army via the waterways of the Mekong Delta.

This allowed the armed forces of the National Liberation Front, also known by their enemies as the Việt Cộng; a contraction of Việt Nam Cộng-sản (Vietnamese communist), to move war supplies from the famous Ho Chi Minh Trail in neighboring Cambodia directly to the gates of Saigon, the nation’s capital. While the South Vietnamese navy marginally patrolled the region, it was clearly not up to the task of stopping these supplies, let alone taking on the enemy’s armed forces directly. Reinforcements and a new approach would be needed to conquer the Mekong.

During the reoccupation of French Indochina, the French pioneered the use of a brown water navy, so called to distinguish it from blue water navies that operated at sea. The concept was to interdict enemy supplies, allowing conventional land and airborne forces to take care of the weakened enemy directly.

The French Dinassauts, as the patrol detachments were called, succeeded in their mission and when the US Navy arrived on the scene almost 10 years later, they took the knowledge and experience of those units to form their own river assault squadrons.

Basic WWII landing craft were modified with arms and armour to serve as a river-based flotilla, backed by heavily armed monitors and fast patrol boats. These were further reinforced by the addition of the 2nd Brigade, 9th Infantry Division, an Army infantry unit. Together, these were known as the Mobile Riverine Force, a truly unique formation.

While fast patrol boats interdicted enemy supplies being trafficked on the river, the MRF’s mission was to directly assault enemy strongholds and secure the Mekong Delta region.