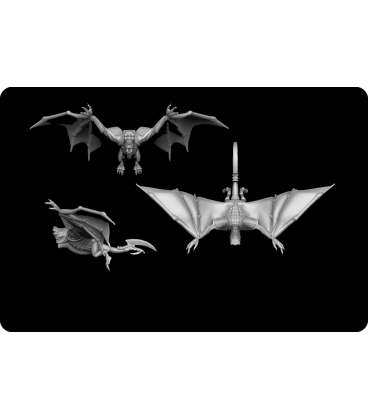 Officially titled ‘Species SC-23-F’, these flying Scourge creatures have swiftly taken on the moniker of ‘Vampires’ among UCM personnel. In their natural environment they roost in large numbers but are skittish, using their powerful tails, talons and teeth to attack larger avian creatures but avoiding ground dwellers or machinery of any kind. However, when implanted with the Scourge parasite and equipped with Plasma Cutters, they become powerful anti-aircraft units, easily disabling dropships before feasting on their passengers and crew.

Vampires use the bat-like qualities of their hosts to cling on to the outside of Scourge dropships when entering the battlefield. Spying their prey, they unfurl their wings and pounce, latching onto unwary enemy from above and melting their way into the hull of ships, eager to get at the sweeter meats inside.