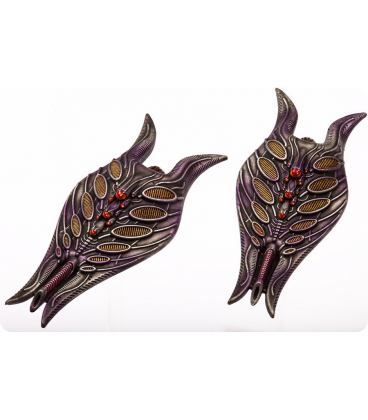 The Corsair is a small, agile interceptor craft armed with a single, powerful plasma canon. Unusually for a fighter, this features a very low rate of fire. However, an impact from this anti tank weapon is almost always fatal for anything less than the heaviest aircraft. UCM pilots have described its effects against light aircraft armour as 'total overkill'. The Corsair's primary tactic is to hold fire until it has reached almost point plank range in order to place a single, devastating shot. This makes it a sinister opponent in a dogfight, since a pilot seldom has the warning of inaccurate fire, and would have absolutely no chance of bailing out should a single blast hit home.

The main reason that the Corsair deploys such a powerful weapon is that it is routinely employed for ground attack missions against enemy armour. Corsairs often run ahead of Scourge dropship flotillas, risking destruction in the quest to annihilate enemy air defences, allowing the Scourge to land in close proximity to their quarry. Indeed, Corsairs seem to readily abandon their own lives in favour of the masses, suggesting some kind of hive-like consciousness in Scourge armies. Presently, this is pure speculation.