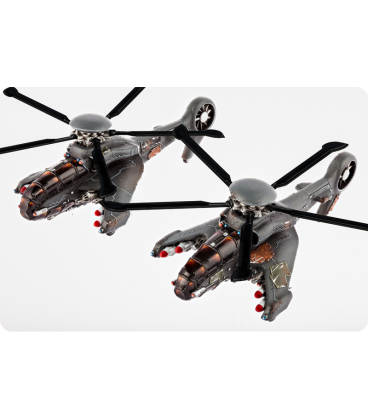 The AH-16 Cyclone is a dedicated attack helicopter, designed solely for dealing swift annihilation to ground targets. It is extremely large compared to its modern UCM equivalent, the Falcon Gunship, and requires a crew of two to operate. Such uncomplicated and primitive designs have their merits, as proven by their reliable service to Resistance groups across the Cradle Worlds. Rotorcraft have fallen entirely out of favour with the UCMA. It is frequently argued that they take up too much room aboard ship and have a poor operating ceiling, making them totally unsuitable for the upper atmosphere drops common in UCM planetary assaults. Since the Resistance have never even dreamed of invading an enemy en-masse from orbit, the rugged design and larger weapons payload of the Cyclone has made it the perfect gunship for their needs. Indeed, the Cyclone’s Beowulf anti-tank missiles have claimed countless Scourge recon patrols over the long years and its Hornet’s Nest multi-missile system can launch a deadly barrage from cover. Normally employed in perimeter protection, armour interdiction and surgical strike missions, the AH16 always makes an impact whenever the leadership deems the situation serious enough to commit them to battle.