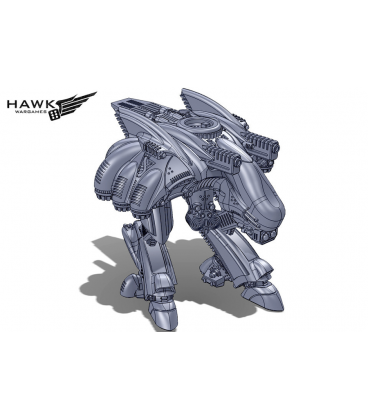 Although almost all PHR citizens are mysterious characters to the UCM, in the case of Jocasta Caine, a small amount of information is known. Most information gleaned about her past came from a single conversation between a UCM ambassador's bodyguard and his opposite number (Caine), who was running protection duty for her commander, Supreme Vizier Varrens. Caine was apparently once a member of the elite Siren Corps, although she was reassigned due to her obvious leadership skills to a command post and given the rank of Battle Vizier (the PHR equivalent of captain).

Subsequent reports of her in battle paint a fuller, more frightening picture. On three separate occasions, forces under her command have descended with swift ferocity on unsuspecting UCM recon patrols, slaughtering them almost to a man and without mercy.

She normally rides to battle in a rarely seen jump-walker type known as the Hera. Caine is also often accompanied by an elite bodyguard of Apollo Strike Walkers, piloted by some of the most gifted operators under her command.

Complete rules and background for Jocasta Caine can be found in Reconquest: Phase 1

This model comes with 4 unique command cards to represent Jocasta Caine's abilities on the battlefield.