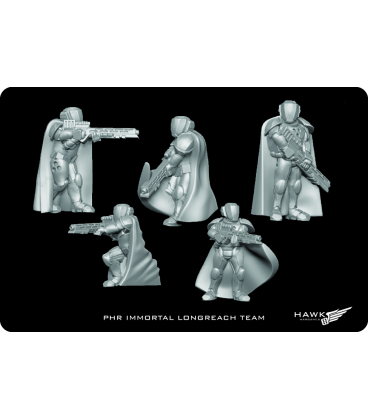 The Longreach Rifle is routinely carried by a heavy weapon bearer among regular Immortal Teams. On occasion however, whole squads have been sighted armed with these formidable anti­matierial rifles. Individually they are certainly dangerous, but collectively they are utterly lethal to armoured units, where the weight of superbly accurate, large calibre, high velocity fire can find chinks in any protection.

Longreach teams are also consummate anti-personnel snipers whenever called to the task, where their high powered weapons represent total overkill against the heaviest infantry armour. They are also equipped with adaptive camouflage cloaks, giving them a measure of concealment against any return fire.