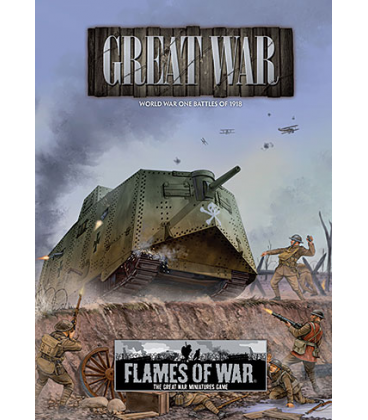 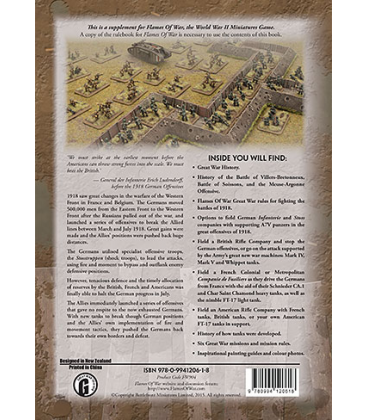 1918 saw great changes in the warfare of the Western Front. Russia pulled out of the war, freeing thousands more German troops to push the Allies back huge distances. The Allied counteroffensives, with their new tanks and evolving tactics, forced the Germans back towards their own borders and defeat.

During 1918 the Germans launched a series of offensives to take advantage of the influx of manpower available when the Russians dropped out of the war after their revolution. One of the key elements in leading these attacks were the Stoss (Shock) or Sturm (Assault) Battalions. To represent these elements the Stosskompanie has been added to the rules. With these new rules you can field a whole force of these elite shock troops.

Any representation of the fighting on the Western Front is not complete without the French. Most of the fighting was on their soil and they held the majority of the front line. They were also tactical innovators, and just like the British and Germans, did much to devise ideas and methods for overcoming the tactical stalemate of the Western Front. They also had a wide variety of colonial troops fighting under their flag. In Great War you can now field a French Companie de Fusiliers with Metropolitan or Colonial troops.

The arrival of the Americans on the Western Front was celebrated by both the British and French. The French in particular, as the Americans were deployed among the French Armies and trained in the latest French methods. However, the American commanders were fiercely independent and didn’t just want to make up the numbers. Because of this, it wasn't long before they were conducting operations of their own. In Great War you can field American Rifle Companies along with support elements. Support can include British and French, and they have their own tank support in the form of American-crewed Renault FT-17 light tanks.

With this new book, Great War is expanded out to cover most of the battles of the Western Front in 1918 (and quite a few in 1917), complete with missions, including the new Pocket Defence Mission. It’s time to break through the enemy’s lines and advance into the green fields beyond!