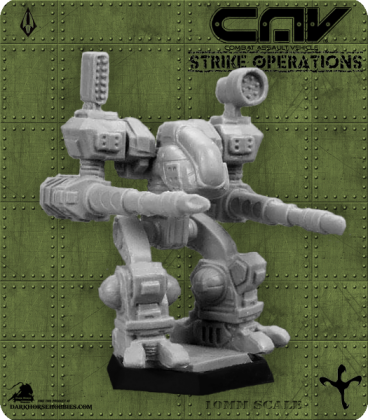 CAV Miniatures: [SO] Dictator B

KODA Works has made incredible profit off the sale of the Dictator and it is found in military forces all over the Galaxy. However, the Dictator Superiority CAV that is currently produced is not the original CAV that KODA Works had envisioned.

The Dictator design was planned with a pair of fast Gauss Gatling Cannons, but the original guns had not yet been completed when the engineers needed to test the prototype's targeting system and the chassis. A pair of indirect fire weapons of similar weight was needed and the design team found a suitable substitute in the aerospace research area.

The GKw 12y Gauss Cannons were originally intended for a strike gunship that was still in design and development. The 12y's rate of fire was slower than the original Dictator design specs since they were designed to attack stationary targets and hardened fortifications. The CAV team borrowed the cannons on the condition that they would evaluate the weapon for the strike bomber team as well and report the data. Since the plan was mutually advantageous, the aerospace team agreed and mounted the guns on the Dictator with the ammunition feeds being cobbled together. The "cobbled" CAV was ready for light testing, and the rest is history...