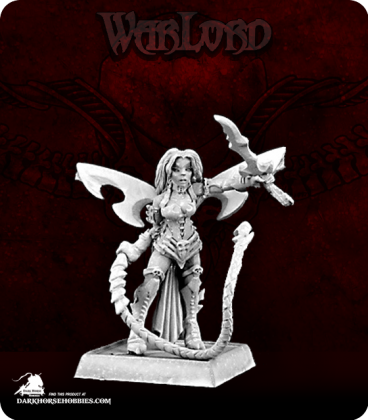 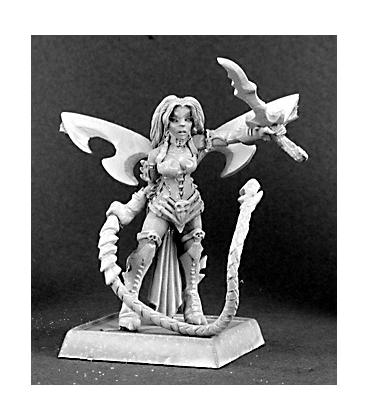 Zora d'Arengo began her climb to power in a rather ignominious place: the brothels of the Pleasure District. A member of the world's oldest profession, she learned that the most powerful of men are often the strongest slaves to their lust. Through seduction, through blackmail, and through outright domination, she began to gather wealth and political power. Soon Zora had enough wealth to assemble a small caravan, and she began exporting pleasure slaves to the North. In Dartha and Malvernis, she found an eager market for her special wares. Her slave raids on the central plains of Taltos spawned a legend of a shadowed beauty who swept young girls from their homes and mothers from their babes.

Meanwhile, in Craclaw she worked on the Aristocracy, seeking to raise her social status. Those she could not seduce, she bribed. Those she could not bribe, she murdered. Zora caused so much chaos that a coalition of nobles rose to oppose her aggression. Her mercenaries clashed with the nobles' troops at every turn. Finally, the nobles were able to cut off her slave routes and laid siege in her estate.

The Empire of Malvernis already had its emissaries in Craclaw, and out of options, Zora approached them to petition the Black Throne for assistance. Seeing an opportunity to secure a political ally in Craclaw, the Empire sent Legionnaires to swell the ranks of Zora's forces. Zora's new army broke the siege and went on a rampage which left most rivals dead or demoralized. Those that survived she sent North in chains, along with their families, as gifts to the Malvernians for their assistance. Shrewdly, she distributed large portions of the captured wealth to Craclaw's Overlords. Blinded by their greed, the Overlords barely notice the blatant interference of the Malvernian Empire.

With her ranks swollen by the flood of soldiers and weapons gifted to her by the Empire, Zora soon had an army large enough to rival the other Overlords. With the might of the Black Throne behind her, Zora assumed the title of Marquise and slipped herself into power amongst the Overlords of Craclaw.

At the same time, she began to consort with Tiroth, one of the Malvernian ambassadors and a priest of Khardullis. With him she shared certain of her exotic talents, and with her, he shared the power of Khardullis. Zora was intoxicated by the Dark God, and threw herself wholly into the worship of the god of strife. In return, he made her a vessel of his power, blessing her with a taste of his power.

Today Zora's position is only growing stronger. The only major challenge to her power came a year ago, when an upstart noble laid an ambush for her as she rode forth to look for new slaves. Caught unaware, she was dragged from her horse, and in one quick motion, the lordling ran his rapier smoothly through her belly. His triumphant shout died on his lips as she only smiled, immune to the pain. With a word, her hands glowed with the black fire of Khardullis and the mortal wound closed. He was too stunned to react as Zora unleashed her magic, freezing him where he stood. She took him back to Craclaw, where she gathered a large crowd of the Aristocracy, forcing them to watch as she butchered him. Her ecstasy was plainly visible on her face, as she tortured the helpless would-be usurper. His gruesome death shocked the aristocrats with a grim reminder of the punishment for betrayal.

Zora rides into battle wielding the dark power of Khardullis. What she lacks in formal warrior training, she makes up for in brutality. The Dark God's power has made her impervious to pain and resistant to wounds which would kill the average man. Zora has built an extensive torture chamber which she uses frequently to ensure obedience, as well as for sport and pleasure. Her most fanatic subjects are the Daughters of the Whip, a group of elite female warriors modeled after the Malvernian Warbrides. Zora revels in watching her Daughters drive a horde of Bondslaves forth to die for her in battle.

Zora's greatest weakness, her vanity, has led her into an alliance with Ashkrypt. In exchange for her support, the Lichlord supplies her with charms and potions to retain her youth. The Marquise is also without doubt the strongest supporter of the Malvernian Empire in Craclaw, though in her mind she believes it is she who uses them. Who is truly the master and who is the slave will only be known in the fullness of time. 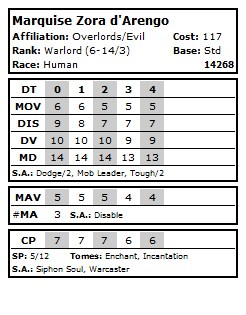