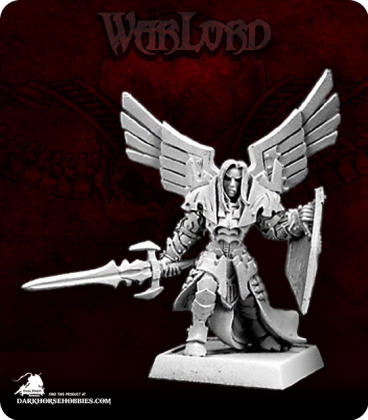 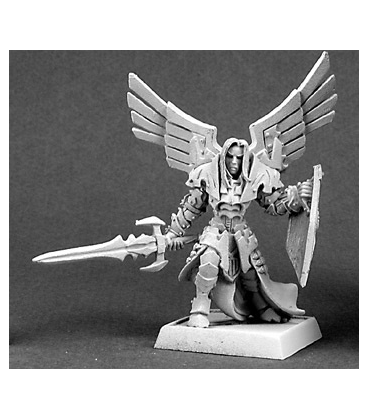 Matisse was born into power, a direct descendant from one of the original slavers who established Craclaw. His father, Lorel, was an Overlord and ruled his share of power with a brutality that is still told in tavern tales across Taltos. From a very young age, Matisse's father made it clear to him that power was fleeting, and his birthright meant nothing to the jackals waiting in the shadows to wrest it from him. He made sure Matisse was trained to be a superb warrior and instilled in him that same ruthlessness which had allowed his forbearers to hold onto the power that was their family heritage.

As the Overlords continued to spread their dominion, they naturally met resistance. During one such battle, Lorel and the famed Wolf of Blackguard Cove, clashed in personal combat. The duel was fierce and both men were sorely wounded, but Lorel fell under the Mercenary's blade in the end. Matisse took charge on instinct, rallying his father's remaining troops, and in a frenzied push, collapsed the enemy lines to force their retreat.

Upon their return to Craclaw, Matisse proclaimed himself Lorel's heir and took charge of the estate. Matisse knew that he would face external challenges to his power, but he did not suspect a challenge from his immediate family as he had no brothers to usurp his throne. Lorel's four daughters however, were able to turn a quartet of Matisse's lieutenants against him and stage a coup. When the officers rebelled, their own troops turned on them in support of Matisse. Matisse had learned from his father never to trust men who hungered for power, and had solidified the loyalty of the soldiers first, instead of his officers. Matisse made an example of the men as he slaughtered them in single combat in the fighting pit known as the Crucible of Blood, with a crowd of Craclaw's aristocrats looking on. This deed done, he turned to deal with his traitorous sisters.

That his own siblings would turn on him filled him with a rage that could not be quenched with blood. To show his resolve regarding his sisters, he proclaimed that they would suffer not death, but would live out their lives in bondage and pain. To that end he turned the four women over to the sadistic Marquise D'Arengo and cleared them from his memories.

Rather than blame his sisters for the events, he focused the blame on the man who killed his father, Duke Gerard Montegue, now leader of the Crusaders of Denelspire. For his father's death, for his unprepared rise to power, and for causing his sisters to rebel, he would have his revenge against the Crusaders.

Matisse sought out battle hardened veterans from whom he learned new battle tactics and began studying accounts of the greatest generals through the ages, becoming a student of warfare. He sent numerous spies into Denelspire to gather information. Ruthlessly Matisse interrogated prisoners of war, seeking information on the Templars and their wretched Duke. Always he searched for an edge, and he knew that to win the day against the Crusaders, he would have to have the most elite fighting force which Taltos had ever seen.

Combing his ranks for the best commanders, he set about forming the Onyx Legion, the prize of Craclaw. Over the last decade, he has honed his men like a fine sword. As one, the Legion crushes their opponents with a martial precision that borders on perfection. The Onyx Legion is known for its prowess and its flexibility; being able to change tactics to always gain the upper hand.

In battle, Matisse leads from the front, fearing no one as he cleaves his way through enemy lines. He prefers to use heavy foot soldiers and cavalry for the bulk of his force, disdainful of using slaves for cannon fodder. He wears the embossed armor of his father with pride but has recently changed his standard. Now he wears the wings of a bird of prey, in mockery of Duke Gerard's angelic standard. His hatred of the Crusaders is now focused squarely on the Duke, and his obsession is beginning to turn to the destruction of not all the Crusaders, but of one man. Cut off the head, and the body will die. 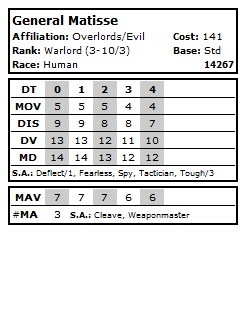