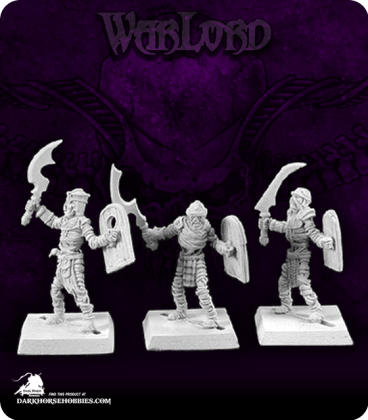 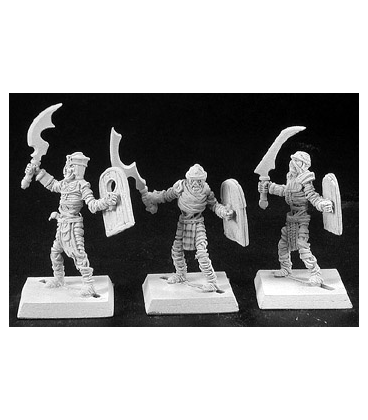 Bodyguards, captains, and gladiators, Tomb Guards lived as warriors and died to serve their mummified masters in death, all for the glory of Sokar. Now they are risen again in service to their old masters and their vengeful god.

Some awoke to find their masters still in slumber. Others awaken in the midst of a full-scale mobilization. A lucky few have returned in the middle of a robbery or desecration. Tales of the dead rising to defend their dusty treasures are not uncommon, and those few who might escape spread horrible tales of fully-armored mummies stepping from their sarcophagi to do battle.

Tomb Guards are fully possessed of their faculties and reason. They serve intelligently and obediently, even though they know their time in such a state is limited. Their bodies are tough and very strong. They can be recovered after a battle and restored, more or less, to their former functionality by skilled priests. But an untimely fireball, a very hungry krungbeast, or a berserking dwarf's axe can destroy them beyond repair.

In such a case, the Tomb Guard's soul will begin to wander with no place to rest. The lucky ones find their way to a skilled magician or priest and are returned as Chosen. The unlucky ones wander for ages and slowly lose their grip on reality. When found, such unfortunates are returned as Reborn.