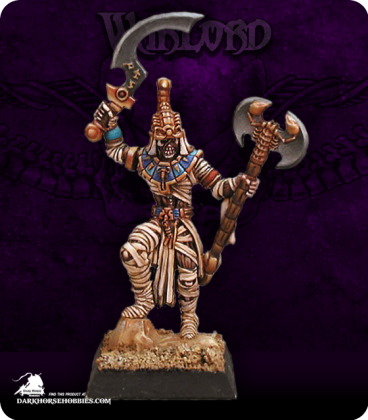 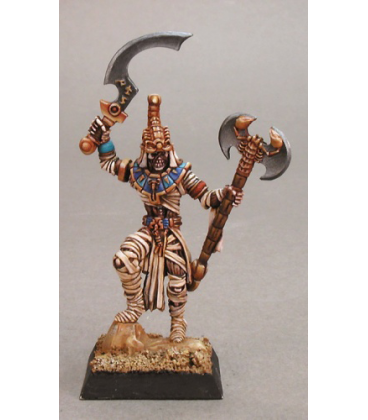 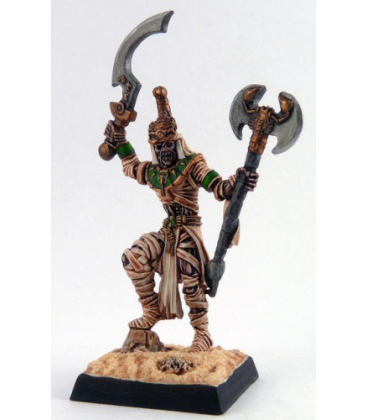 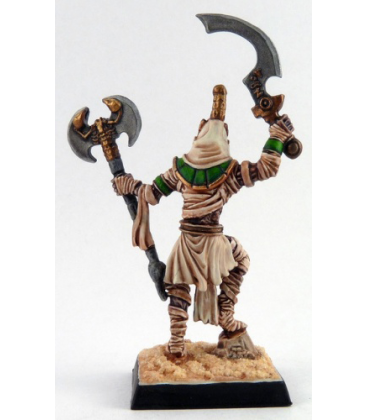 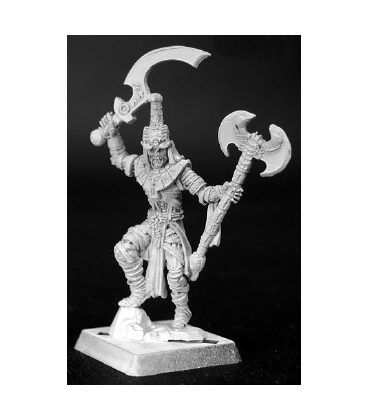 Sokar's return stirred many of His most faithful servants from their tombs. First to rise was Khufu, greatest of the Priest-Kings of old Hakir. His ba and khaibit journeyed the length and breadth of the Mehet Nesep and saw the depths to which the quickened races plunged. Forgotten were the duties to the ever-living. Forgotten were the ways of Hakir. Forgotten were the traditions of Sokar, though he still warms the earth and guides the dead across the Great River.

Khufu heard Sokar's word. Order must be restored! He journeyed into the depths of Jalahandra and found that desert had covered the great cities of Hakir. The stars guided him to the final resting place of Al Adiri. He called out to the city and raised it from the desert floor.

He stood aghast at what the parting sands revealed. Al Adiri, city of pharaohs, shining jewel of Hakir, lay devastated. A mighty falcon, the ba of Sokar Himself swept down from the heights and spoke to Khufu.

The mighty pharaohs had lived in Al Adiri for generations, each building monuments seeking to outstrip the last. Until, that is, the time of Imt'pet'khet the Prideful. Imt'pet'khet sought to raise a monument to the gods, a monolith of such impossible height that Imt'pet'khet could greet Sokar on his daily journey across the Great River of the Sky. The gods sent their warning to Imt'pet'khet in the form of the prophet Maat'heset. But the pharaoh was not dissuaded and butchered Maat'heset for his impudence.

The gods let Imt'pet'khet the Prideful labor long and hard to build his mighty monolith, and each year the deities would strike it down with plagues and disasters. With their final curse, the gods destroyed Imt'pet'keht's children and rendered the foolish pharaoh impotent, thus ending a dynasty that had lasted for two thousand years. In his wrath, Imt'pet'khet ordered the gods' names abolished from all temples and writings across Hakir. He made their worship a crime - punishable by torture and incineration. Most people, fearful of their own safety, complied with their mad king's demands. Those that resisted, of which there were many, were slain and annihilated.

This madness ensued for many years. Many of the old gods of Hakir were weakened or obliterated. Until finally one day, the most fanatic of Imt'pet'khet's followers opened a tomb in the Mehet Nesep, seeking to erase Sokar's name. But Sokar, being the god of the ever-living and the ferryman across the great river, had lost none of his potency. His name remained intact in every tomb across the empire, and he did not stay his hand out of kindness to the people as the other gods had.

Sokar abandoned his daily journey across the Great River for a time, and the crops withered. He commanded the dead to rise up against the living. And he chained the great crocodile beneath the sea. Her thrashing and rage produced tidal waves of immense height and storms of awesome power that smashed Ancient Hakir into shards. Al Adiri sank beneath a sea of sand, and Ancient Hakir was no more.

Khufu wept dust for the tale of his people and the Hubris of Imt'pet'khet. The city that the greatest of the Priest-Kings has founded lay ruined by pride. The old gods that Khufu had once known by name were now forgotten. Only Sokar remained.

Khufu swore to Sokar that he would protect the tombs of old with his very existence. They journeyed together to the center of Al Adiri, greatest of cities, to the very temple-throne of the Pharaohs of Ancient Hakir. Sokar bade Khufu to inscribe his name in the Book of the Dead, a great golden tome of such brilliance that the sun need never shine within the walls of the temple-throne.

Khufu placed his name within the book and entered the Mesha Sokar. His first task was to raise a force of the ever-living and take them against the Khamsin, who had let their duties in the Mehet Nesep lapse. Once the Khamsin had atoned sufficiently for their crimes, Sokar relented and Khufu brought them back into his worship.

Now Khufu works effortlessly to find undisturbed tombs of the Sleeping and bring them into the Mesha Sokar. Al Adiri teems with life once more, and from there the Mehet Nesep shall be freed. 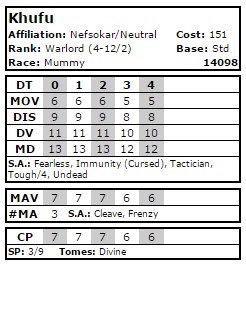