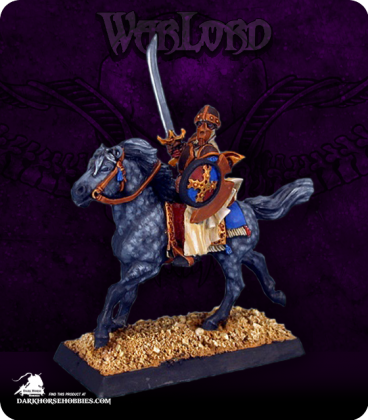 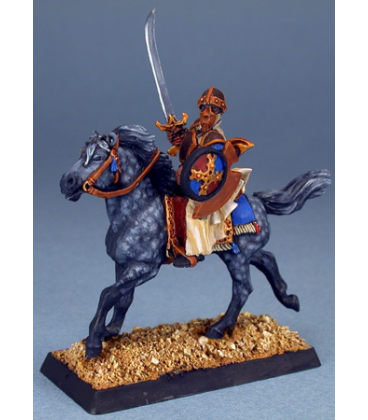 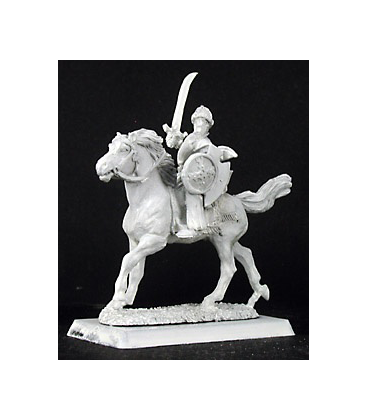 Khamsin Raiders make up the core of the Khamsin's fastest hitting mobile forces. Their steeds are almost universally Jalahandran purebreds, known for their amazing speed and long-distance endurance. Such mounts are prized across Taltos and realms beyond.

Cavalrymen and women are drawn from the Khamsin tribes that travel the desert and steppes. Most Khamsin can ride proficiently, but the cavalry troops practice their arts to a high degree. Unlike lancers, Raiders are typically used to turn flanks or conduct rear assaults on an opposing force. Their great speed makes encircling enemy formations a matter of simplicity.

Once engaged, cavalry troops use scimitar, shield, and warhorse to deadly effect. The horses themselves rarely need instruction from the rider and will stamp, kick, and bite of their own accord.

Cavalry troop weapons include spears but most often they find themselves in the midst of sustained melee where the heavy-bladed chopping scimitar is most effective. A strong blow can cleave helms and skulls alike, and a sharp blade can sever an exposed neck in a single blow.

Dust Devil Raiders are chosen from the best of the Khamsin regular forces. They undergo additional training, in particular the ability to rapidly disengage an opponent in preparation for a second charge. Raiders work best in conjunction with lancers. Raiders enter a sustained assault, tying up an opposing line until lancers can strike from a flank or from behind. 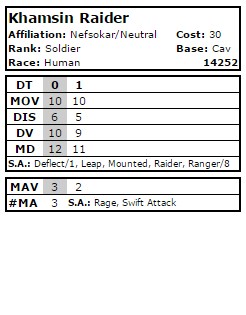