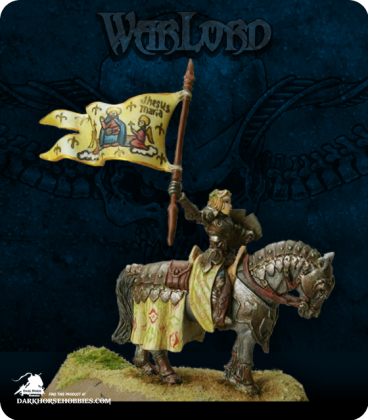 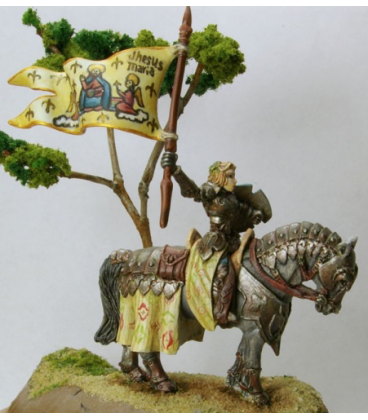 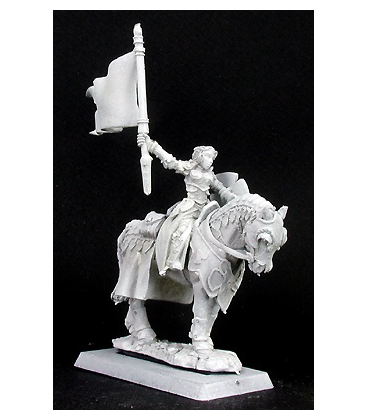 Jehanne has always been prone to strange circumstances. She was born poor in Racheau, her father the overseer of a stables and her mother working as a cook in the attached inn. The local mayor and his guard were little better than thugs, and as she grew, her parents hid her among the stable hands dressed as a boy out of fear for her safety. This deception lasted until Jehanne was fifteen, when she judged it best to leave home before she was discovered and her parents punished for their ruse.

The roads were not a very safe place for a young woman on her own, and Jehanne may have come to harm but for the freakish luck which dogged her steps. Barely a week out from home, she aided an ex-Captain of the Ivy Crown, Bertrand, taking up his sword and rallying the people of his village against attacking bandits as he lay wounded. The grateful Bertrand offered to teach the girl how to actually use the sword as a reward for her valiant action. He had served with the Light Lancers of the Knights in his early days, and now his home was open to any of the Order passing through. Between the errant knights and her new mentor, Jehanne was kept busy learning sword, lance, and bow, in addition to how to fight from atop a horse, for over four years. At the end of it, she joined the Order, and Bertrand gave her as a parting gift a yearling sired by his own warhorse. Delighted, Jehanne named the young horse Night's Approach for his dark color.

Always gifted on horseback, Jehanne was soon promoted to the Light Lancers herself. Two more years of training drew her across the water, far from her homeland, to Taltos, where the Ivy Crown fought to establish a foothold amidst the constant strife and chaos. There was evil everywhere in the land; Jehanne's days were filled with scouting and skirmishes with all manner of foul creatures.

Jehanne knew Denelspire by reputation; the Ivy Crown had attempted to enlist the aid of the Templars there, but were refused. Nonetheless, for some reason it seemed always to hover at the edge of her mind. Muddled dreams gave way to waking visions, always during the rays of the setting sun, when an angelic presence only she could see warned her of the darkness stalking the Tower of the Dawn. These visions grew more frequent until, the evening of the Darkspawn invasion, Jehanne was victim to a vision of such violence that she fell into convulsions. Pale light streamed from her eyes, imbuing all it touched with dread. When she awoke she knew that the Tower would fall. She and her fellow knights rode hard through the night to reach Denelspire, but they were too late. While the rest of the Ivy Crown patrol flew to the aid of Taltain fleeing the unearthly screams and roars they heard within the Tower, Jehanne charged for the main gates. Before she could gain them, they were filled by a towering demon, a being of such evil that its aura alone flayed the soul, and only Approach's quickness saved Jehanne from a blow that would surely have split her in two. Denelspire was taken by the enemy. But Lady Jehanne was too stubborn to give up easily, and the angel had shown her the man she had to find.

To this day no one but she and Gerard know what passed between them, but he agreed to aid her, and with the help of the Knights of the Ivy Crown and the Devoted of Gianovia the Tower was regained. Jehanne's success in organizing and training the troops for the siege netted her a field promotion to Commander of the Bloodwood (Taltos) Chapter of the Ivy Crown, the youngest to ever hold the position. Today the poor girl from Racheau sits in Council with Duke Gerard and other Crusader leaders, coordinates Ivy Crown strikes and missions into the surrounding lands, and strives to make sure that relations continue smoothly between the Poor Man's Knights and the current Templar Order. She does not know what she will do if Gerard's elders depose him, but until then, she will do what is right. 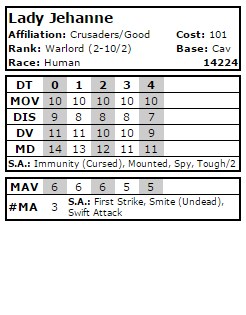