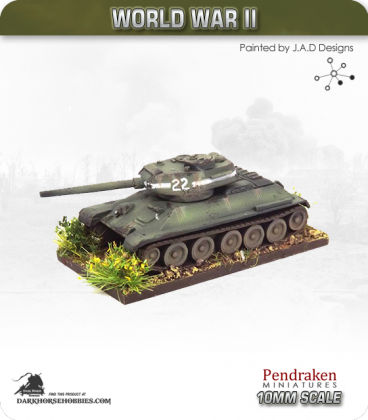 After improved German Panzer IVs with the high-velocity 7.5cm (2.95 in) KwK 40 gun were encountered by the Soviets in combat in 1942, the Red Army needed to respond with something better than the T-34. The new tank, the T-43, was intended to be a universal model to replace both the T-34 and the KV-1 heavy tank. However, the T-43 prototype's armor, though heavier, was not capable of defeating the German 88 mm guns. Another problem the T-43 faced was that its mobility was found to be inferior to the T-34 as well. Consequently, the T-43 program was cancelled.

There were also issues for the Red Army when facing the improved armor of the new German tanks. The 76mm gun of the T-34 had become completely inadequate against the new German tanks as it could not penetrate the front armor of the Tiger I, and could only penetrate the sides at very close range. During testing against a captured Tiger I, it was discovered that the Soviet 85 mm anti-aircraft gun, the M1939 (52-K), was capable of doing the job, so derivatives of it were developed for tanks. The D-5T variant was found to be capable of penetrating the Tiger I's upper hull armor at 1,000 metres, though still not enough to match the Tiger, which could destroy the T-34 from a distance of 1,500 to 2,000 m (4,900 to 6,600 ft), it was a noticeable improvement for the T-34 design.

With the T-43 canceled, the Soviet command made the decision to retool the factories to produce an improved version of the T-34. Its turret ring was enlarged from 1,425 mm (56 in) to 1,600 mm (63 in), allowing a turret capable of supporting the larger 85 mm gun to be fitted to the tank. The prototype T-43's turret design was a larger three-man turret, with radio (previously in the hull) and observation cupola in the roof was hurriedly adapted to fit the T-34 chassis. Now the tank commander needed only to command (aided by cupola and radio systems), leaving the operation of the gun to the gunner and the loader. The turret was bigger and less sloped than the original T-34 turret, making it a bigger target (due to the three-man crew and bigger gun), but the thicker 90 mm armor made it more resistant to enemy fire. The ammunition for the new gun was 50% heavier (9 kg) than the 76 mm rounds, but it was much better in the anti-armor role, and reasonable effective for general purpose uses. One drawback the new gun system brought to the platform however, was that only 55–60 rounds could be carried in the tank, instead of the 90–100 number of the 76mm rounds. The resulting new tank, the T-34-85, was seen as a compromise between advocates for the T-43 and those who wanted to continue to build as many 76mm armed T-34s as possible.

The T-34-85 gave the Red Army a tank with better armor and mobility than the German Panzer IV tank and StuG III assault gun. While it could not match the armor or weapons of the heavier Panther and Tiger tanks, its improved firepower made it much more effective than earlier models, and overall it was more cost-effective than the heaviest German tanks. In comparison with the T-34-85 program, the Germans instead chose an upgrade path based on the introduction of completely new, expensive, heavier, and more complex tanks, greatly slowing the growth of their tank production and helping the Soviets to maintain a substantial numerical superiority in tanks. By May of 1944, the production of T-34-85 tanks had reached 1,200 tanks per month. In the entire war, production figures for all Panther types reached no more than 6,557, and for all Tiger types (including the Tiger I and Tiger II) 2,027. Production figures for the T-34-85 alone reached 22,559, giving the Red Army a substantial numerical superiority over the German war machine.